CRU is a Blockchain-based token offered by the Cryptounit Blockchain 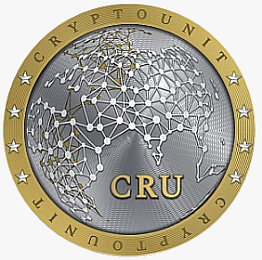 The CRU (Cryptounit) token is issued on the Cryptounit blockchain, which is developed based on the EOS code and uses the Delegated Proof-of-Stake (DPoS) consensus algorithm. The advantage of the Cryptounit Blockchain is the high speed of transactions (up to 20,000 per second) and zero commission for the transfer of tokens.

Cryptounit blockchain company is an international team of specialists and developers of the highest caliber in IT and digital assets. The issuance of CRU started in March 2021, which amounts to thousands of hours of uninterrupted operation of the Cryptounit blockchain with more than 900,000 virtual wallets owned by users from all around the world.

The number of CRU tokens is currently ≈10 billion (there are no additional emissions). The number of tokens issued will decrease as they are burned when the CRU is converted to a WCRU security token. All CRU tokens were distributed among the participants in the early development stages of the CryptoUnit Program and credited to their personal wallets on the Cryptounit blockchain.

CRU utility token is designed for:

The Cryptounit CRU token currently already has several applications and with the development of the project, its application can be further expanded.

Where to Buy or Sell CRU Tokens

On UnitEx Exchange or other exchages. UnitEx is a great trading platform that provides cryptocurrency wallet management services, and also includes crypto-fiat and crypto-crypto exchange transactions. It is safe and secure.

It is also possible to convert the CRU token into the WCRU security token and become a co-owner of the Global Investment Portfolio CryptoUnit.

1 WCRU is now worth $2
(waiting for price update)

Please note: The sale of WCRU security tokens is temporarily suspended.
Stobox finished the roadmap on 29th October 2022. Further news will be released soon.
However, it is possible to buy CRUs on UnitEx or other exchanges, transfer them to the Cryptounit Blockchain, exchange them for WCRUs with a 1 : 1 ratio (in Q2/Q3 2023), and move them from there to the new STO exchange, where the WCRU will change its name.

UGPay Group AG, Global Unit Pay, UnitEx exchange, Cryptounit blockchain, Academy of a Private Investor and New Digital Evolution are among the operating businesses that are part of the Global Investment Portfolio CryptoUnit.

Holders of the security token WCRU are co-owners of this portfolio, which currently comprises more than 60 financial instruments from various segments of the investment market and has a valuation of over $11.6 billion, according to the independent evaluation of Crowe Global.